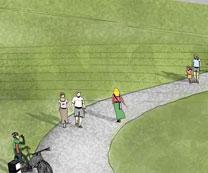 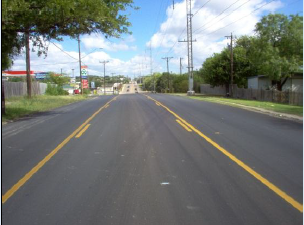 VICKREY provided roadway, drainage, and utility design engineering services for the reconstruction of 3600 feet of Callaghan Road from Ingram to Hemphill Street. The project involved the upgrade of the street from one lane in each direction to a full secondary arterial section with two lanes in each direction and the reconstruction of seven (7) street intersections. There were two existing, low water crossings which required upgrades to a culvert that could contain the 100-year design storm. Another existing culvert at Darwin Drive was replaced and upsized to meet the 100-year design storm. The design of the upgrades required permit approval from the Corps of Engineers. The project involved shared-use lanes and shared-use paths for bicycle and pedestrian usage in the area. Special coordination efforts were required due to the location of an elementary school and much of the project being in the school zone.  VIA bus stops were also upgraded as part of the project.  Utilities were very important during design since there were existing electrical transmission line towers, overhead electrical, natural gas transmission mains, water and sanitary sewer in the existing Right of Way. The design of the culverts and storm drainage was completed to avoid as many conflicts as possible. The firm also prepared the construction plans for water, sanitary sewer and gas main improvements within the project limits. The traffic control plans were designed to incorporate proposed utility and roadway improvements. The project was designed for three separate entities in less than six months.